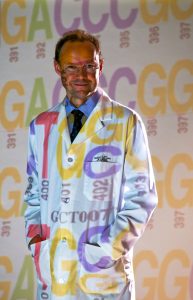 Congratulations to Dr. David Huntsman, one of three members of the UBC Faculty of Medicine to be elected to the Royal Society of Canada (RSC).

Dr. David Huntsman is the Dr. Chew Wei Memorial Professor of Gynaecologic Oncology, holds the Canada Research Chair (Tier 1) in Molecular and Genomic Pathology, and is a Professor in the Departments of Pathology & Laboratory Medicine and Obstetrics & Gynaecology at The University of British Columbia. He is a Staff Pathologist at the BC Cancer Agency and a Consulting Pathologist at the Vancouver General Hospital.

Dr. Huntsman is a co-founder and Director of BC’s Ovarian Cancer Research (OVCARE) Program, where he leads a multidisciplinary team of over 50 scientists, staff and trainees in the study of ovarian and other gynaecological cancers. He is also co-Director of the Genetic Pathology Evaluation Centre (GPEC) at the Jack Bell Research Centre, VGH and former Medical Director of the Centre for Translational and Applied Genomics (CTAG) at the BCCA.